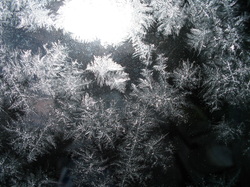 While the Illumination Process combusts most energies in the Luminous Energy Field, some toxic energies can crystallize, becoming nearly material objects, which are impossible to metabolize through the Illumination Process. They are like petrified wood, which no longer burns. These crystallized energies embed themselves in the physical body. Amazon shamans believe that crystallized energies are the result of black magic or sorcery. I have found that these energies can be caused by anger, envy, or hatred directed at us by another person. Sometimes they are also energetic remnants – memories of how we died, how we were hurt, or how we were killed in a former existence.

When we are under a continual barrage of negativity, the defense systems of the luminous body can become overwhelmed. Negative energy directed toward us can crystallize and embed itself in the physical body. This happens over a period of weeks or months. These energies do not belong to us. Because the energy has become nearly material, it must be extracted manually. The extraction must take place only after an Illumination has cleared a client’s Luminous Energy Field.

The limbic brain takes the symbolic as literal. The repertoire of images of this ancient brain structure remains unchanged. When we have been betrayed, we say that we have been “stabbed in the back” because symbolically we have.  Such traitorous acts and the intense emotions that accompany them create pools of stagnant energy in the Luminous Energy Field. The longer it takes for one to recover from the betrayal, the more time this energy has to crystallize. Eventually, it begins to acquire the shape of a dagger stuck in one’s back, as this is the way that our limbic brain perceives it. When we suffer from heartbreak, these energies can assume the shape of a metal band constricting the heart, or a steel trap that has our feelings locked in its grip. Likewise, sexual abuse during a client’s early years often appears as an arrow or shaft piercing the lower belly, puncturing the chakra where sexuality and self-esteem reside.

Sometimes crystallized energies that have hardened within the body often originate in former lifetimes. They have been within us for so long that they have become embedded in body tissue. During an extraction, clients will spontaneously describe images from a different era – the field of battle where they were abandoned to die, or their homes being burned and relatives slain.

The Extraction Process consists of several steps that include scanning the client’s Luminous Energy Field and identifying and extracting the crystallized energy. I always perform the Extraction Process during an Illumination. Unless the crystallized energy lies at the outermost layer of the Luminous Energy Field, it can be difficult to perceive. The Illumination is the equivalent of cleaning the dirt from a wound before removing the shards of glass embedded in the skin.

Negative energies are initially attracted to us because they have an affinity with us. We draw these energies to us in the same way that we attract certain kinds of people to ourselves. Every form of energy has a frequency and a vibration. Anger can penetrate our Luminous Energy Field only when the vibration for anger lives within us, and hatred can affect us only when self-hatred is present. It is not enough to extract the crystallized energies affecting a client. Their affinities have to be changed – the self-hatred or anger healed – so that the client does not attract a similar energy once again. The Illumination Process heals a client’s affinities for these energies by clearing and stepping up the frequency at which a chakra spins. As the vibratory rate of a chakra increases, we begin to attract pure, clear, beneficent energies.

Intrusive entities are disincarnate spirits trapped between this world and the next. Sometimes an intrusive entity may be one of our own former lifetimes that has been awakened from our unconscious and wants to live again; thus vying with our present self for access to our central nervous system. Intrusive entities attach themselves to a chakra and through it connect to the central nervous system, where they enter into a parasitic relationship with the host. They are energy-sucking “lowlifes” of the Spirit world.

Intrusive energies are fluid. They stream throughout the Luminous Energy Field like a dark, rippling tide. They flow from chakra to chakra, cruising through our nervous system. Intrusive entities are fixed to the particular chakra they feed through. Often an intrusive energy is so powerful that it seems to have a personality, and therefore we believe it must be an entity. At other times an entity appears so weak that you are convinced that you are dealing only with an intrusive energy. When persons who are spiritually open become emotionally unbalanced, they are easy targets for parasitic intrusive entities. These disembodied beings are drawn to the spiritually unwary like moths to a flame. No amount of talk therapy will be effective in dealing with this condition. When these energies are extracted, healing can move forward more rapidly.

All energy has consciousness, even the most basic and primitive, so that an intrusive energy can seem to have a humanlike personality. When a healer tunes in to it he or she can sense the anger, hatred, or envy belonging to the person that directed their thoughts against her client.

Intrusive entities are more common than we would like to believe. An intrusive entity may appear as one of two types: one of our former selves (a former lifetime that has awakened from the subconscious mind), or a disincarnate being who has penetrated our Luminous Energy Field. The intrusive entity may be a deceased relative or friend who is coming to us for assistance. When a person dies suddenly in an accident, or under narcotics in the hospital, he can become lost between this world and the next. He is not aware that he has died, and comes to us for comfort. We bring him into the safety of our luminous body, in the same way we would take him into our home if he were hurt or suffering. His energy mixes with ours and begins to wreak havoc in our Luminous Energy Field. When I extract an intrusive entity from the Luminous Energy Field, my client’s physical and psychological symptoms often disappear.

Intrusive entities feed on the energy of the chakras and central nervous system. There is no more nutritious form of energy. They attach themselves to the spinal cord through one of the chakras and are able to experience that person’s thoughts and feelings. The Luminous Energy Field has a difficult time eliminating these foreign energies. Unlike the physical body, which can eliminate the elements it cannot use through urination, bowel movements, sweat, and respiration; the luminous body has no opening. When these energies have entered the central nervous system, we have to extract them using a clear quartz crystal.

Another explanation of "entities" that I find helpful:
" When a soul completes a lifetime here on Earth, it is intended that the soul will return to the higher realms, and resume their evolutionary journey in those realms. However, in some cases, a soul may be unwilling or unable to fully separate itself from the human realm. This may be for a variety of different reasons. One of the more common reasons involves addictive behavioral patterns such as alcohol or drug abuse, gambling addiction, or sexual addictions.

In such cases, when the soul leaves (through death) the body in which the addictive behavior patterns were formed, it is attracted to places or situations in which living humans are involved in these behaviors, such as bars, gambling casinos, strip joints or bordellos. However, when the soul is no longer in a physical body, it can only observe other humans that are involved in these behaviors, but it cannot experience the feelings of the addictive behaviors. The only way they can do that is to merge into the embodiment of someone who is involved in these behaviors, and experience it through that person's body. All too often in such cases, the wayward soul then becomes "entrapped" in the body of the other person, and does not know how to leave, or perhaps does not want to leave.

From the perspective of the person who has been invaded by the wayward soul, it is what is commonly referred to as being "possessed", or as having an "entity" within the body. The best protection from being invaded by such a disembodied entity is to maintain a strong and healthy energy field, and of course, to avoid addictive behaviors. Unfortunately, drugs and alcohol severely weaken ones energy field, and makes such a person especially vulnerable to intrusion.

There are other situations which commonly attract entities. Most common are situations that involve "emotional vulnerability". An example would be a person who becomes distraught over the death of a family member or friend. Such a person might then attract a disembodied entity who would, with all good intentions, attempt to console them. If the entity is not careful, however, it can become entrapped in the body of the distraught person. And frequently such entrapments continue on for many years . . . in some cases, a lifetime.

We have found that if a person has one attached entity, it is likely that they will have more than one. And the more entities a person has, the greater the drain on their energy level. We believe that many cases of Chronic Fatigue Syndrome are essentially nothing more than a situation involving attached entities.

How does one know if a person has one or more attached entities? Inconsistency in personality characteristics is one of the most common indicators . . . sometimes pleasant, but at other times coarse or abusive. Also, a person with attached entities tends to avoid direct eye contact . . . the entities are in effect "hiding" inside, and they are afraid that they might be seen . . . and indeed they can be seen by skilled spiritual counselor."  - John Hornecker


An Illumination to Complete the Healing

A second Illumination should always follow an Extraction. This changes any affinity for the energy/entity and completes the healing. If the affinity isn’t changed, another intrusive energy/entity will seek the client out. An Extraction is a bit like a divorce. You can throw the bum out, but unless you change your affinities, you will end up marrying another.

﻿Celia Blackwood works as a shamanic practitioner and spiritual guidess. ﻿
These services complement those provided by a licensed health care provider.
She is not licensed to practice medicine or psychology nor does she provide diagnostic services.
Her services are intended to assist you with your spirit and soul journey and are not intended as a substitute for licensed medical or psychological treatment.
To book an appointment: https://calendly.com/heartstonehealing